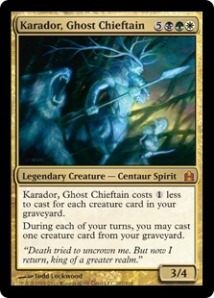 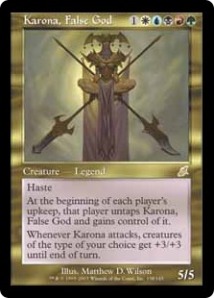 This was the deck’s maiden voyage, and I was really, really excited to try it out. I had a good start. The deck runs smoothly on 3 lands, which I had, plus some mana rocks, into a Jar of Eyeballs and a Champion of Lambholt. Then, Bruna untapped on turn 6 or 7, cast Sovereigns of Lost Alara, swung and searched up Eldrazi Conscription and dropped Corrupted Conscience from hand. Now I have to wait 97 games to try this deck out again. Thankfully, the game ended quickly. Maybe the next one would be fun…

Inspired by This Article on the Wizards site. I had already built an All 2-CMC deck (Ashling, the Pilgrim) and an All 1-CMC deck (Isamaru, Hound of Konda), and liked the idea of Immortal Servituding every creature from my graveyard, so every card in the deck has a CMC of 3.  Techinically Karador isn’t 3-CMC, but I had a Doran deck already, and Doran doesn’t work nicely with this deck. Plus,  Karador can be cast for 3 mana (so that’s the only way I’ll cast him in this deck) AND plays very nicely with the idea of the deck.  In test draws it was a lot of fun to try to build into the combo, but it will be a while now before I find out if it works.