This was my second submission to the Commander Cast Contest. This one also didn’t win.

This cycle starts at 2 mana for a 2/2 and ends at a 6/6 for 6.  Each has an ability that has a major-effect on the game, where that effect is particularly stronger against the non-color, and can be built around in its own deck.  I used Hybrid mana in the 2 and 3 cost creaures in order to technically have the colors in the mana costs. This makes them a bit easier to cast in the early game. Color identity prevents them from slotting into 2 or 3 color decks, and the hosing of a  particular color strategy makes them less optimal in 5 color decks.

Spirit of the Earth 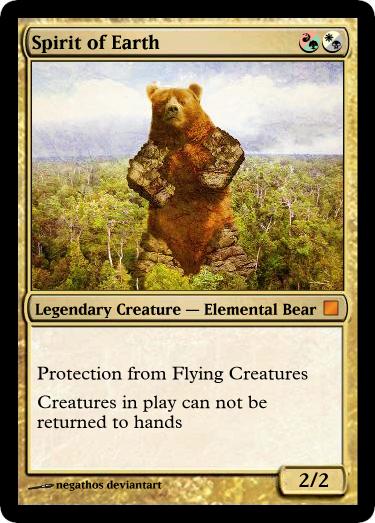 This guy’s name was originally “Gravity Bear.”  He is not blue and prevents bounce strategies.  Pro-Fliers doesn’t do much on defense, but he’s also only a 2-drop. 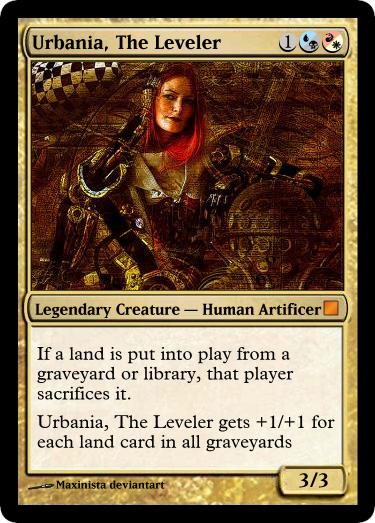 Urbania would like nothing more than to see gleaming spires, crowded streets, and even dingy alleyways cover her plane (can’t someone buy her a planeswalker ticket to Ravnica?). Her grand plan, and it is Her plan, involves clearcutting the wilderness and building and building. She sells it well, but few others notice how powerful she grows as her cityscape spreads.
_design notes:_ This shuts down certain forms of ramp, which is one of the most annoying things about big green. It hits Primeval Titan [who was not banned at the time of the contest], fetch-lands, Oracle of Mul Daya, not Azusa though.  At one point she also made you discard any non-drawn lands too, but I thought that was too much at this cost, and I wanted her to beable to come out early in the game to slow ramp.  She hits your own ramp too OR if you ramp first (via fetches or artifact ramp) she’s bigger.   Her red-ness also plays well with Land Destruction.
The templating on this card is really poor.
Astaia, Souls’ Barrier

Astaia believes that the soul’s purpose is to serve on this plane, and that the only allowable death is a natural one (or at least an honorable one on the battlefield).
_desgin notes_:  There are sacrifice effects in all colors, but black has the most, and the most ability to cause others to sacrifice. This is a pretty powerful effect in EDH.  This card was created before Sigarda and before the other Angel that prevents sacrifices as costs.  I think the symmetrical effect is more interesting.
Anx, Spellweb Spinner

Anx’s webs capture the magical energies and vibrations, as well as the pain suffered by those around her, which she feasts upon.
_design notes:_ Her main ability shuts down red direct-damage strategies.  Reach is standard spider fare, but I didn’t want to break the cycle pattern and make her a 5/7.  I thought about adding a triggered ability that caused her toughness to grow when she was targeted, but I decided Shroud was a simpler and less wordy choice. Shroud, not hexproof, because she’d rather eat the spells you’d send at her than allow them to affect her.
Thursus, Grasp of Depths

Thursus exists in the unfathomable void that lies beyond life, death, or the imagination.  It’s empty there, and Thursus intends to keep it that way. It’s avatar emerges from the depths of the sea (or the mind).
_design notes_: White has a lot of exile effects, and this card at least gives you the hope of getting the cards back.  The second ability gives a degree of control against Wrath effects or other board-wipes. Note that it can give any player’s creature undying, so it can be used politically.  The Return to Hand cost is meant to represent Thursus retreating into the player’s mind. It gives undying rather than indestructible because the latter feels more white. If X is 0, it’s a convenient way to bounce Thursus to your hand in response to targeting, and be able to recast it without extra General fees. I almost changed it to ‘avatar’ creature type, but I really wanted to make a UBRG Zombie deck.