Note: I’m going to start a series where I rate, and give a synopsis of, my decks. I’ll look at each deck, explain what it does (how/if it wants to win, what “kind” of deck it is), how much I like it, how “good” I think it is, and how often I feel like playing it and maybe an anecdote or two.

Note on Decklists: Having so many decks means that it’s REALLY time consuming to keep decklists updated. Not every deck is on TappedOut.com, and many that are have changed significantly. That said, IF YOU WANT A DECKLIST: leave a comment or send me a message and I will find time to fix, or create, the decklists on TappedOut.

Here’s the Quick Rubric I’ll use for some of the questions. 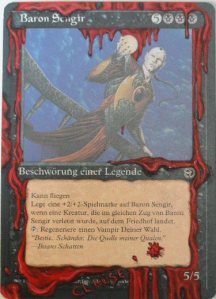 Name: True Blood
Style: Tribal,
Tribe?: Vampires, All FOIL
Want to play?: 4
“Good?”: 2
Like?: 5
Deck Notes: My first mono black deck was Drana. I liked the vampire arts so much I started getting foil versions, and eventually I decided to foil it out, even to the extent of cutting cards because they could not be foiled. Baron Sengir is the exception, and my Baron is awesomely altered by a friend of mine (the pilot of Balthor / Gisa). One of my favorite all-time games happened with this deck. 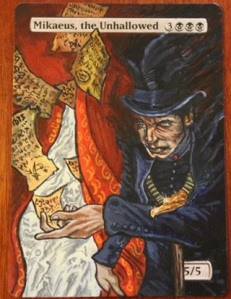 Name: The Shade
Style: Combo / Value
Tribe?:
Want to play?: 2
“Good?”: 3
Like?: 2-3
Deck Notes: Mikaeus is good, and so is recurring things. I do play Triskelion in the deck, but if people ask nicely, I’ll certainly replace it with a ridiculously terrible card instead.  The main reason I keep this deck around is because of the fantastic alter that my friend did to make it look like the Shade from DC Comics (“Starman” in particular).

Name: The Purple Deck
Style: Ultra Mono
Tribe?: purple things
Want to play?: 3
“Good?”: 3
Like?: 3
Deck Notes: This was the second “Ultra Mono” (no cards not of the color identity aside from lands) deck I built, mostly as a way to trim down the stack.  I really like the way purple looks on black cards, especially in foil, so there are quite a few cards in here just because the art has purple in it.  Other than that it has a Chroma/Devotion (I prefer Chroma) feel and some “sacrifice” themes as well.

Name: Rise!
Style: Creatureless Reanimator
Tribe?: whatever you’ve got
Want to play?: 4
“Good?”: 3
Like?: 4
Deck Notes: This was one of my first “creatureless” decks.  The goal is to kill your things and raise them again as my zombies.  Adding Chainer as an Alternate commander was a recent innovation. It changes the way the deck plays slightly. This one also generates mana very well, and uses things like Exsanguinate as a back-up.

Name: Rats
Style: Rats
Tribe?: Rats
Want to play?: 1
“Good?”: 2
Like?: 1
Deck Notes:  This is your everyday Relentless Rats deck, though it also plays other Rat Tribal.  I’m not sure why I don’t like it more

Name: The Thirteen
Style: Tribal
Tribe?: Demons, Clerics
Want to play?: 4
“Good?”: 3
Like?: 4
Deck Notes: This is the Nemesis deck to Heliod+ (though not ultra mono), there are 13 Demons in the deck, including the general, as well as 18 Shadowborn Apostles and other clerics (and a few Horrors, Avatars, or It That Betrayses).   Nefarox was the original choice because I had a Russian Foil, but Ob Nixilis, Unshackled makes an even better option because of all the sacrificing of clerics (I actually wish he didn’t have the Anti-Tutor Jerk ability at all).  Door of Destinies is pretty good in this deck.  Nefarox is getting his own new “Creatureless” deck soon.

Name: C.R.E.A.M.
Style: Tribal
Tribe?: Mercenaries and Minions
Want to play?: 3
“Good?”: 2
Like?: 4
Deck Notes:  King Macar has gold, Mercenaries like Gold (and are a terrible tribe, so of course), and kings need Minions.  I really like Macar’s ability, and having Gold Tokens.

Name: The Shovel and the Damage Done
Style: Aggro
Tribe?: (not) Zombies
Want to play?: 2
“Good?”: 3
Like?: 4
Deck Notes: A newer deck that I should play more. Not the Zombies and Robots version, but instead it’s a zombie deck that plays no zombies at all. She just shovels things into zombiedom

Name:
Style: Alternate win
Tribe?: Spirits
Want to play?: 2
“Good?”: 2
Like?: 3
Deck Notes:  Iname is efficient at getting creatures into the graveyard to make Crypt of Agadeem really good, or to win via Mortal Combat.  I have Spirit tribal decks in several colors and color pairs.  Witchbane Orb is there to protect me from Tormod’s crypt.