I kept a 2 land hand, and got to 3 lands before I stalled for awhile. I played some cheap janky spirits early on (yeah Ghost Hounds!) and also a decent Nether Traitor. Jarad played an early Rune Scarred Demon and Gisa was saccing and recurring Kokusho (at least 3 times). Jarad tried for an Avenger of Zendikar, but Lazav countered it, and then used his pet Crypt Rats to kill of more creatures. I’m still not doing great in the land department.

I get to enough lands to cast Insidious Dreams, searching up Crypt of Agadeem, Necrologia, Witchbane Orb and Mortal Combat and stack it so I draw the crypt and then Necrologia. Jarad has both Thuderfoot Baloth and Demonic Overseer and is saccing dudes to eat our life totals. I have all of the pieces I need to win the game, but not enough mana to do it right away. I had to play the Witchbane orb first (relevant because of Gisa’s Nihil Spellbomb), and was 1 short of also casting both Mortal Combat and Iname as well. However, we were all low enough thanks to Jarad that Gisa just needed to recur Kokusho once more to kill us all.

The other two guys that were there this night ended up playing Two Headed Giant Tiny Leaders (each of them playing two TL decks) for awhile and then just burning out on Tiny Leaders.

This is mostly a pretty standard Win By Mortal Combat OR By Big Crypt of Agadeem Mana Fueled Spell Thanks to Iname’s Ability deck. I play a lot of crappy spirits and a few non-spirits. The rest of the goal is to just load the graveyard and play off of that. Nothing special, but it was fun to play and cheap to build. 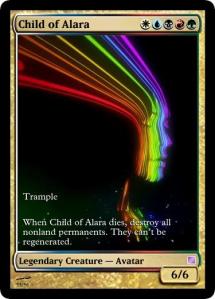 This was a crazy game.  The guy who usually plays Balthor took the helm of our other friend’s Karona deck (random cool foils theme) so he could play Sapling.

I started with no Gates in hand, but 3 shock-lands and a coiling oracle. I also play an early Sacred Ground and a few Cluestones.  Braids’ Fatespinner slows down the early game.   Karona hits the table early on and starts making the rounds.

I get a Rings of Brighthearth and a Vesuva and a Maze’s End.  Trostani has a Voice of Resurgence and some other things and Braids is ramping with Dreamscape Artist.  Karona gets hits in on Trostani and Braids, and then hits her owner twice.  Karona’s owner does quite a bit of ramping.

There was a lot of crazy politics-ing happening about how and where to send Karona, who has put everyone but me into General Damage range.  Thanks to the Rings and occasional double-Maze-ing with Vesuva, however, I am able to hang on to win by Completing the Dragon’s Maze.

The write-up here  (being written several months after the fact) doesn’t quite do justice to the crazy and fun stuff that was happening in this game.

The goal is to win via Maze’s End.  Even though they aren’t all great for the deck, all 10 Maze Runner legends are in the deck, as well as all 10 shock lands (despite what the list above says). It’s not strictly Ravnica Block in construction, since there’s a great need for non-basic land searching that Ravnica block cards can’t provide. I’m definitely going to slot in the Tempting Offer land searcher, not that I expect anyone will ever let me draw off of it.

I don’t have the image easily on hand, but the full-art foil proxy I made for this one actually says “Child of Ravnica” on it instead of Alara. The general doesn’t often get cast, but since the deck mostly depends on Lands to win, it’s not a bad choice.