Due to Backlog, and temporal distance, these recaps will be brief.

Recap: I cast Gishath twice, and had a big board, but a Blasphemous Act did us in. It was a fun game. 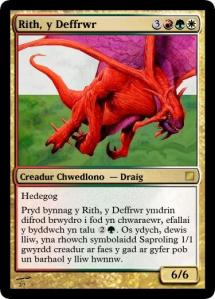 I keep a 1 land hand with a Wild Cantor (and draw into a second land on turn 2). I miss a third land drop, but cast a Commander Sphere.  Iname plays some spirits and a Royal Assassin, and Meren has a few elves in play.  I’m able to Artifact Mutation Iname’s Caged Sun (mostly because I needed some creatures in play), and follow it up with a Sporoloth Ancient and Scatter the Seeds. Iname gets cast and dumps 20+ spirits in his yard.  Meren casts some creature that mostly wipes the board, dealing with Doran’s Siege Rhino.

I cast a Sporemound, and then follow up with Rith on Turn 7. Iname has a 20/20 Revenant and also a Mikeaus in the graveyard. Meren has  a Birthing Pod and starts finding stuff. When I get the chance I’m able to swing and kill Iname over the course of 2 turns. I get an active Beast Master’s Ascension, but I lose Rith (and then am able to recast it).  I intend to kill Meren, but I miscalculate.

Doran casts a Forgotten Ancient and then uses Aligned Hedron Network to neutralize my team. I misplay my mana and don’t have enough to retrurn and cast a Naya Charm.  I draw some cards off of a Psychotrope Thallid.  Meren is still hanging on and getting life, via stealing Siege Rhinos with a Sepulchral Primordial, whereas I am losing it, and then dying.

About the Deck:  I wanted a new Naya deck, and Rith was always my favorite of the Invasion Dragons. I also wanted an excuse to make more poorly (i.e. Google) translated Welsh Magic cards.  Rith fit the bill well both because the name was transliteratable and because the art could easily be edited to look similar to Y Ddraig Goch.  My Rhys the Redeemed is also poorly translated into Welsh (because it’s a Welsh Name and it pisses me off when people pronounce it wrong).

The deck has a pretty strong Saproling Theme to it, as well as some color changing effects to maximize Rith’s breath-weapon. It also has the Sporemound/Life and Limb combo for good measure. 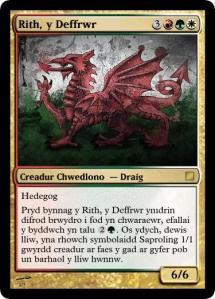 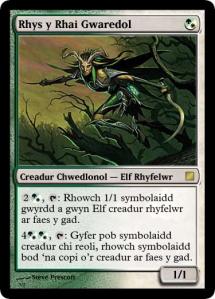 The Rest of the Night: I did also win a game with my “Creatureless” Soramaro deck.

I start with 2 forests and a hand full of Red and White Cards. I discard, then draw a karoo-type land. Finally I get to cast a Yavimaya Elder, and throw a Rancor on a Llanowar Knight. Sisters plays a Xathrid Gorgon. Ulasht has Fires of Yavimaya and a Primal Hydra. Gisa has Night-Eyes and Maze of Ith.

I play Commander Thoctar with a Scourge of the Nobilis and get a few shots in at Ulasht, who also has massive stuff like Hamletback Goliath, Kalonian Hydra and others. Sisters of Stone Death whiffs with Genesis Hydra, Ulasht plays an Avenger of Zendikar and then Sisters hits a Boundless Realms. Gisa is doing Phyrexian Dreadnought tricks (and Hamletback get HUGE, before Sisters has a giant meal of it). I try to kill the Avenger of Zendikar, but the Fires saves it. In the end, I think there’s a Gravecrawler loop that makes us lose.

About the Deck
I needed another RGW deck, and I also read about some really fun pauper combo decks in that color, so I put this together. The combo to try to get is Impact Tremors/Midnight Guard/Presence of Gond.  Lots of other stuff to help the Thoctar beatdown if necessary.

Oloro’s player was from out of town and found our venue online. We were the only three players this evening. Oloro introduced himself by saying “This is a competitive deck,” but upon inquisition we determined that it was neither a turn-3 infinite combo deck, or a long boring drawn out multiple-extra turn monstrosity, just Esper Goodstuff (he admitted that his commander is just there to give life from the C-zone).  I am trying out a new deck (my first build around one of the new commanders).Tolsimir is on that player’s reunion tour.

I start with 4 lands and an Aura Shards (a card I HATE). I play Garruk Wildspeaker into Marath.  Oloro has played Erebos, and Tolsimir plays a lot of curved-out accelerator guys.  Then Oloro wipes the board.  I cast Marath again and get a bit of value out of him (with a Gaea’s Cradle).    I try to cast Marath for 7 but it gets hindered. This is followed up by Myojin of Night’s reach. I draw lands for the next three turns and have nothing else on the board (maybe a 1/1 elemental token).  Oloro keeps gaining life, and Tolsimir keeps swinging at him.

Oloro plays a Rune-Scarred Demon and a Sphinx’s Revelation, which gets a Demonic Tutor. I play an Aether charge and eventually cast my VERY FIRST EVER kicked Tooth and Nail, which gets me Marath back (and does for with Aether Charge before ceasing to exist) and a Vigor (which gets Ashen Ridered).   Oloro’s Diluvian Primordial casts my Tooth and Nail and gets Elesh Norn and some other non-sense. I cast a Gruul X spell to do 8 to Elesh, 8 to Primordial, and 8 to Oloro’s player. Later I  Beast Within Elesh Norn (who has returned), and re-cast Marath for 9. Tolsimir gets Desertioned, some other stuff happens, but ultimately I cast Marath for 11, Memnarch appears and steals it and I get attacked for all of my life.  Tolsimir dies soon after.

About the Deck (http://tappedout.net/mtg-decks/marath-gone-wild-2/ is a pretty darn close list)

Marath looked fun, and I’d had a bunch of GW Beast tribal stuff sitting around because it didn’t make the cut as a Sub-Theme in one of my Trostani decks. I decided that this deck would be mostly a Beast deck.  It plays 42 lands (a record for any of my decks) because I also decided it would be an Artifact free deck (meaning no mana-rocks).   Cathar’s Crusade is pretty decent with Marath (I didn’t feel like making a Doubling Season proxy, or buying another Doubling Season).   I really wish that Marath made Beast tokens, because that would be super dumb with Aether Charge.  I also play 4 Planeswalkers (3 Garruks and Xenagos) which is a record number.  This is one I’m really looking forward to getting to play  again.

After a decent game with Zur, I decided to pull out this Random Naya pile. I started with a two land hand, but stalled out at three lands for a long time (though it allowed me to discard Anger to the yard).  I didn’t do much more than play a Personal Sanctuary (a french one that I couldn’t translate). I may have also played a Retaliator Griffin.

Balthor had  a Caged Sun and a Pontiff of Blight. Maelstrom Wandered into a Myr Battlesphere and possibly also a Molten Primordial. I don’t remember much else from this game other than Mikaeus showed up and we all died to massive amounts of extort from the Pontiff of Blight.

This deck is sort of a random mishmash of things. I needed to have another Naya deck at the ready so I could take apart Uril.  Johan was a favorite Legend from the old days, so I through this deck together. It does a lot of different things. Making big mana by attacking or Mana Echoes. Tricks with Aluren and Horned Kavu and Warstorm Surge (or making a Changeling loop), some life gain tricks.  It’s not a very focused deck, but it can be a lot of fun to play.

I started with a hand of 6 lands and a Serra Avatar, and thus I played Uril on Turn 5, followed by an Academy Rector. Olivia was already on the board and pinging.  Balthor didn’t get off to a very fast start, but was frightening as always. Though I hadn’t drawn any Auras yet, I chose to get Mirari’s Wake when Olivia killed my Rector. I played a Qasali Pridemage who just chilled out and Exalted Uril (until he needed to take care of Balthor’s Akroma’s Memorial.  Eventually I had an Empyrial Armor on Uril (with one card in hand), but by this time Olivia was fully active, and Balthor had Gravecrawler/Altar/Mikaeus combo action, which Olivia stopped once by forcing Mikaeus to get sac-ced, but the thing about Zombies is that they keep coming back again and again, and he Mikeaus got recurred and we died.  It was a mostly fun game.

This is a standard Uril + Enchantress style deck. There’s not much creative in it, and thus this was it’s final hurrah. I think I’m going to take it apart and turn it into a Krond the Dawn Clad deck.